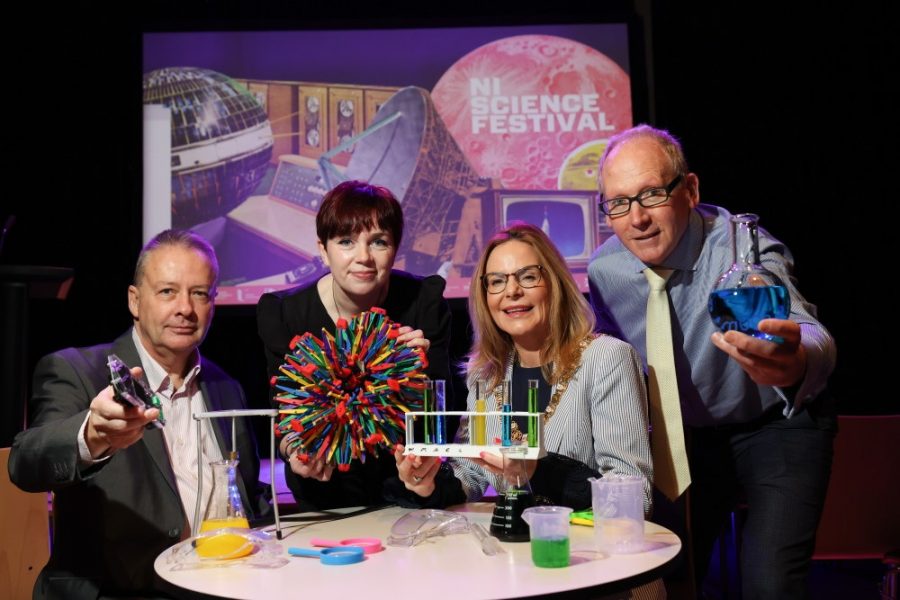 Wildlife cameraman, presenter and Strictly winner Hamza Yassin and aerospace engineer-turned-baker Andrew Smyth are Belfast-bound alongside world-renowned astrophysicists, neuroscientists, environmentalists and more as NI Science Festival returns to celebrate the science of you, the universe and everything in between.

From flies to farts, meteorites to music, the annual festival, a celebration of all things science, technology, engineering, arts and mathematics (STEAM), will return for a jam-packed 11 days of discovery from Thursday 16 – Sunday 26 February.

Over 200 events are planned across Northern Ireland covering everything from the natural world, our planet, and the vast expanse of space to technology, engineering, the mind and body, food and much more.

Commenting on the launch of this year’s festival, its director, Sarah Jones, says: “We’re very pleased to be able to return with our largest selection of events yet, celebrating the diversity of people working in STEAM sectors locally, nationally and internationally, and championing, among others, homegrown innovators, artists and academics at the cutting edge of research.

“This year’s festival extends right across Northern Ireland to spread the joy of science, technology, engineering, arts and mathematics. We aim to ignite interest in the world around us, to spark conversation and debate, and we hope this year’s extensive programme will create new learning opportunities for festival goers old and new.”

Speaking at the festival launch, Mike Brennan, Permanent Secretary of the Department of the Economy, said: “I’m delighted that the Department for the Economy is continuing to support the NI Science Festival. STEAM subjects will be a key driver of Northern Ireland’s future economy, but we must have the talent coming through to fill the jobs that our economy will create – we need the capability and capacity to drive our ambition.

“By making STEAM more accessible, the festival’s events encourage young people and their parents to think more about the benefits of studying STEAM subjects, with a view to their future career, or to show those of us already in the labour market that there are opportunities in the STEAM sectors that can be grasped by upskilling or reskilling in these areas.”

Belfast Lord Mayor Councillor Tina Black said: “My congratulations to NI Science Festival Director Sarah Jones and her team for curating a programme that’s out of this world! We’re so proud to support the NI Science Festival – not only does it bring a sense of joy, fun and discovery to science for people of all ages, it’s stimulating the type of thinking and skills about ourselves, the universe and everything in between that are so vital to Belfast as an innovation city. The sheer diversity of this year’s programme is inspiring. I can’t wait until February now – and I look forward to seeing the buzz around all these wonderful events.”

Now proud owner of the famous glitterball trophy, wildlife photographer Hamza Yassin, a familiar face on programmes including Countryfile and children’s TV show Let’s Go For A Walk, will share his passion for the natural world, combined with his love of adventure, in a talk at the Whitla Hall, Queen’s University Belfast (26 February).

In his talk, Behind the Lens, the ornithologist and conservationist will share his secrets on how to capture the best images and record footage of even the most elusive animals, offering a fascinating insight into the world of wildlife filming.

Judge of Netflix's Baking Impossible and Great British Bake Off finalist Andrew Smyth will bring his brand-new family show Bakineering to Belfast (17 February) and Derry~Londonderry (18 February). Exploring incredible engineering through edible means, the aerospace engineer-turned-baker will use interactive baking demos to showcase the engineering principles that keep us safe when travelling via road, sea or sky.

The Nerve Centre-led project Our Place in Space makes its triumphant return to Northern Ireland as part of the festival. The highly-acclaimed super-squashed solar system designed by artist Oliver Jeffers lands at the Ulster Transport Museum (24 February), offering a final chance to wander around the galaxy along the stunning locations of the North Down coastal path.

The festival welcomes John & Brenda Romero to The MAC to celebrate 30 Years of Doom (24 February), one of the most influential video games ever created. Released in 1993, the pioneering game is widely recognised for its impact on, and shaping of, the first-person shooter genre. John Romero, one of its creators, will discuss the lasting legacy of the franchise and the future of gaming.

Festival favourite Jim Al-Khalili, distinguished professor of theoretical physics and celebrated author, will return to discuss his new book, The Joy of Science (21 February), covering everything from how to handle uncertainty and doubt to coping with the general complexities of modern living.

For all the family, the good doctor from the hit CBBC children’s television series Operation Ouch, Dr Xand van Tulleken returns with another family-friendly show, Science with Dr Xand! (18 February), packed with stunts, crazy experiments and amazing facts, exploring the fascinating world of human biology. And Rude Science with Stefan Gates comes to both Belfast (25 February) and Strabane (26 February) with scientific answers to the questions everyone is too shy to ask: Why do men have nipples?

Alongside a wide selection of events taking place right across Northern Ireland, the festival will also take to the road with its Regional Roadshow. Featuring a whirlwind interactive introduction to the brain and nervous system plus an exploration of the wonderful world of our senses and the tricks they play on us, the roadshow will visit Limavady (16 February), Antrim (17 February), Omagh (18 February) and Armagh (19 February).

The 2023 NI Science Festival runs 16–26 February. For more information about events and bookings, visit nisciencefestival.com. Keep up to date with the festival on social media via Facebook, Twitter and YouTube.